You play as Bruce Lee and you have to pick up all lanterns on each game screen. To stop you from this there is both a ninja (a very stupid one) and Yamo (who is a bit tougher but almost as stupid). Finally certain traps are implemented at certain spots in the game. Once you have picked up all lanterns an exit of some kind is normally displaying but remember it may not show up at the screen where you picked up the last lantern.

A great thing in the game is that you can play a two player mode. It does makes the game easier as you only have to fight against the (stupid) ninja as player 1 is controlling Bruce Lee while player 2 is controlling Yamo. The great thing is that you can fight against each other but can also work together if needed. As mentioned the graphics doesn't look but in this case this is actually making the game fun and it's till very easy to see what the different things are. A great arcade fighting game.

This is an amazing remake of the Commodore 64 version of Datasoft's famous Bruce Lee game, which was released for PC in 1984. Say goodbye to ugly 4-color CGA palette of the PC original: this remake by Mark Rosten is far and away a superior version, retaining all the intuitive gameplay of Commodore 64 version as well as bright 16-color graphics. For anyone who is not familiar with the original Bruce Lee, here is my review of the original PC version (also on this site):

One of the first semi-realistic side-scrollers for PC. MobyGames has the scoop on this martial arts classic: "Bruce Lee is a decent platform game with a lot of action thrown in. Reflexes are needed to pass certain sections, as is a lot of timing to jump past obstacles. You're pursued by two enemies, who unrelentlessly come after you, snapping at your heels. It's very fun for anyone who likes platform games. There is no "easy" mode to help novice gamers get used to the game. Also, fighting the enemies is relatively easy and just gets irritating after a while. Finally, Bruce Lee only runs at the correct speed on a 4.77MHz PC. Well, one more gripe, actually--you're Bruce Lee, yet you only have two moves, punching and a flying kick. A little disappointing from a master of martial arts. If you love platform games that require good reflexes and timing, Bruce Lee fits the bill."

The game also features a great range of movement and attacks that makes games such as Bushido simplistic in comparison. Definitely a must-have for all martial arts fans, and three cheers to Mark Rosten for porting THE ultimate version of this classic to the PC. 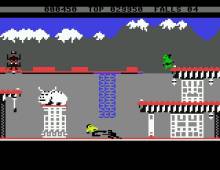