Bounty Bob Strikes Back is a great sequel to Bill Hogue's classic Miner 2049er game. Although this is much better than the original, it wasn't as commercially successful - perhaps due to poor marketing and the fact that in 1985 the hype surrounding Bounty Bob's first adventure was starting to fade.

Which is a real pity, because Bounty Bob Strikes Back sports numerous improvements over the original and a more challenging gameplay, while retaining the same addictive quality. You are still Bounty Bob, a stumpy miner who must 'claim' every mine level by walking over every platform segment on each level. Like the original game, you must deal with monsters and strange contraptions, and finish each level under a strict time limit. Like Pac-Man, you can eat 'Super Energy Food Bars' when they appear to gain temporary powers to kill monsters.

Similar to Miner 2049er, almost every new level in Bounty Bob Strikes Back features new contraptions, monsters, and other assorted surprises. The combination of reflexes and strategy required is unique to each level, thanks to the game's devious level design. The graphics are more detailed, and there are now 25 levels - more than twice the number of levels in Miner 2049er. You can now move Bounty Bob in mid-air during a jump, and sound effects are much improved over the original game. Overall, if you love platformers or innovative action games in general, Bounty Bob Strikes Back is a must-have. 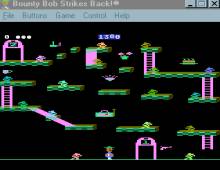