One of the best Pong games I have ever seen, Bounce Zone is a 3D Pong game that is full of all the options you could ever want. You can change bat sizes, gameplay speed (although you would need MoSlo or other slowdown programs anyway if you want to play it on anything faster than a 386), and difficulty levels. The gameplay itself is also deeper than Pong, because you can move the bat forward and backward (into the foreground - the third dimension, in other words) as well as sideways. The game was not exactly freeware - it was included with an issue of Compute! magazine.

All in all, if you have a few minutes to kill, you can't go wrong with this addictive freeware game that truly stands the test of time. You would also be hard pressed to find a better Pong game, freeware or otherwise. 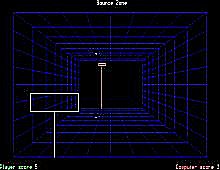