Bob Winner is an early action game with some adventure elements by Loriciel, set in the US' wild, wild West. Bob Winner is on a quest to find a lost civilisation, and has to collect three keys which are being held by three opponents that he meets on his journey - two boxers and a gun-wielding cowboy. To fight them, Bob has to find the right object. There are only about twenty screens, but they all feature stupendous digitised backgrounds.

Back in 1986, the game was best known for its beautiful background graphics on the 16-bit home computers (if I remember right?). The PC conversion is lacking a bit there with its 4 colour art, overall comparable to the Amstrad CPC version. But then for CGA standards the backgrounds still look very nice. The game itself is a fun little game for a while, not much more. 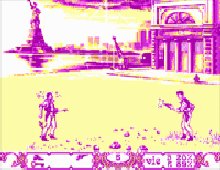 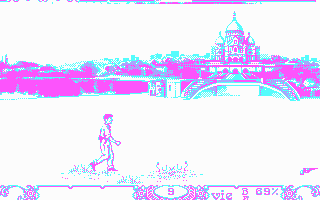