Buck Rogers: Planet of Zoom is a simple but fun CGA shooter based on SEGA's arcade game of the same name. It's probably best described as Zaxxon from a first-person perspective as opposed to isometric. Gameplay is fast, fun, and furious-- you have to avoid crashing into obstacles on the ground, as well as concentrate on shooting the flying enemy ships. Smooth graphics and fluid controls make this a knuckle-blistering experience that all SEGA fans should enjoy. Recommended, especially to those who like Zaxxon but find it a little too difficult. 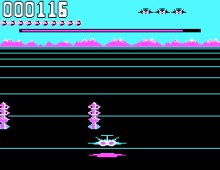