Bio Menace is a typical but quite enjoyable early platformer by Apogee. Despite the cliché defeat-aliens-that-invade-Earth plot, Bio Menace offers huge levels, fun power-ups, and detailed EGA graphics that is a step above Commander Keen (the engine of which powers the game). On the downside, the game has many annoying bugs. For instance, sometimes when you restore the game, you'll find yourself back on the previous level you've been through already. It is no wonder that the game includes a lengthy troubleshooting section, but it's still likely that you will come across one or two bugs before finishing the game. This nuisance aside, Bio Menace is a fun shareware platformer that isn't Apogee's best, but is by no means their worst either. Worth a look if you like platform games or Apogee's classics. 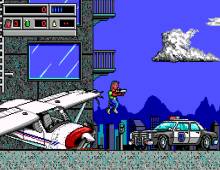