BOFH: SUS, tapping on the Bastard Operator from Hell legacy, is an overhead shooter game, very much like Tapan Kaikki, or older action "adventures" on 8- and 18-bit systems.

To quote the story from readme file: "A group of insane activists called the "Internet Salvation Force" has invaded a school, taking all servers and workstations as hostages. They don't care of human hostages so all the personnel have been told to leave. As the BOFH, you arrive late at work, and find the building unusually quiet... Enraged that the computers have been taken away from your command, you decide to fight the activists alone. Your goal is to reclaim the server room at the sixth floor, but first you must defuse the bombs the activists have placed at network closets around the building. Search the activists you have killed for extra weapons, first aid kits and bomb defusing instructions. Also seek useful tools from the building."

Thus, BOFH: SUS has a bit more intresting premise than your average shooter. Although the fact that you must find randomly placed scientists for the instructions for the bomb defusing mostly just means that you have to run around a lot, there's kind of an oldschoolish charm to the whole setting, especially the strict 60 minute time limit to solve the game. The fact that BOFH starts out unarmed is also quite appealing - you have to beat an armed villain with your bare hands to get a hold of a weapon. If this sounds like the game is not very easy, you're right, it's not. It's not terribly difficult either, though - once you get the hang of it.. the instructions could be a little better. The game could also use a few more, or even randomized, missions. It's not hot on longevity, except on the challenge sector. There is a level editor, but I hear it's a bit on the side of being difficult to use.

The graphics are not great. The resolution is low and the palette dull, and gameplay-wise a larger resolution with more field of vision would be nice, as it would be easier to sneak up on enemies - there's not too much health to waste. There are some nice details however - breaking glass, exploding computers (watch out for the shrapnel!).. and the sounds and music are quite good, especially those illegible shouts that villains make when they spot BOFH.

The game also plays quite good, although there are a few buttons to remember, and it's quite easy to die. If you're craving for some challenging, old-fashioned action, be sure to check out this game. 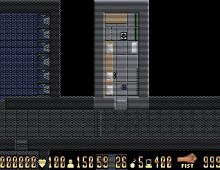