Baron Baldric: A Grave Overture is a fun - and very rare - shareware platformer ported to the PC from the Amiga in 1992. Although the game is by no means a classic, it is sought after by many Apogee fans because the star of this game, Baron Baldric, would later star Apogee's charming isometric game called Mystic Towers. It is very rare because the registered version was never sold outside Australia, but thanks to this site, Apogee fans no longer have to look :)

More info from Lon Matero's Mystic Towers pages: "The Apogee FAQ says this about the first game: Baron Baldric, the star of Mystic Towers, originally starred in a game called, simply, Baron Baldric: A Grave Adventure." The game was designed for the Amiga by professional animator Lindsay Whipp of Animation F/X. It was then ported to the PC. The game was a 2D scrolling platform game and released as shareware by Manaccom in 1993.

A Grave Adventure takes you under Castle Pedabouch in search of the family treasures in the tomb by the evil wizard Lazarus. Centuries ago, Baron Baldric's ancestor, Baron Lazarus Pedabouche studied an evil Wolf-Magic and became a cruel tyrant. But when he seized Roise, a local milk-maid, he was stoned to death by his own subjects. Rosie died too, and was doomed to haunt the castle until Lazarus is slain."

The game is reminiscent of classic platformers like Impossible Mission 2 and earlier Montezuma's Revenge because of many non-action elements. You have to find flints to light lamps when they go out, and regularly eat food to survive. The game is by no means a classic, but it is a fun platformer that will keep you entertained for at least a few hours. Recommended, especially to Apogee fans of course ;) 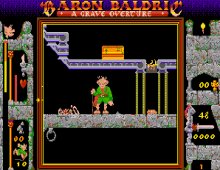