Ant Man is a fun futuristic platformer from Namil Soft, a Korean games developer that was later acquired by fellow Koreans Wizard Soft in 1999. The game is similar to Thexder and Mega Man series: you control a "mech" sent to infiltrate the enemy base and - you guessed it - kill everything in sight. The game is fast, fun, and fluid, with attractive anime-style graphics and smooth animations of enemy robots. Definitely well worth a look if you enjoy anime action games.

Note: the game is in Korean, but there is very little text in the game, so nobody should have a hard time figuring out what to do ;) 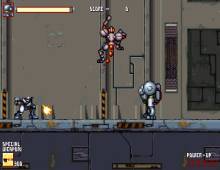