Baku Funshigi is an interesting and quite unique 3D action game from Japan. The game plays like those cavefliers from Finland (or UrthWurm for that matter) - your only goal is to maneuver a tank to the exit without hitting walls and other obstacles. The game is played from a first-person perspective, with you as a skinny stickman perched atop a white paper-machier-lookalike tank. You can only do two things with the tank other than changing directions: speed up, and slow down. That is pretty much all there is, but the game is much more difficult than it first appears, mostly due to the semi-realistic physics engine. You can't immediately stop your tank while it's moving very fast, for example, and neither can you make sharp turns at high speed. Rotating turnstiles, blocks, and huge pools of water are just some of the obstacles you need to avoid. The game has 8-9 different levels (called "floors"), each of which sports its own perils and power-ups you can use. I find the game very difficult because it takes a while to get a hang of the tank. And when I do, the game throws even more challenges at me. The higher floors are very neat, though, especially when you get to drive the tank across a huge pool. If you enjoy 3D arcade games that are simple to learn, but challenging, Baku Funshigi is worth a look. Recommended, but more for the innovative game idea and level design than on longevity - of which there is very little here. 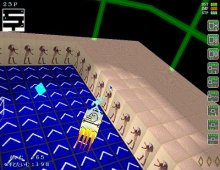