Assault Wing is a fun shareware "caveflyer" from Finland that that has been released as freeware. If you have never played a caveflyer before, the idea is simple: two or more players fly their ships in cave-like two-dimensional arenas, trying to destroy each other.

Similar to other great caveflyers for PC such as AUTS and V-Wing, Assault Wing offers different ships to chose from, each having its own strengths and weaknesses (typically based on the conventional power vs. speed tradeoff). You can equip your ship with a number of cool weapons, although some are so powerful as to hurt the balance of gameplay. In addition to neat weapons, you also can pick up different kinds of bonus items during the game, which can have both beneficial (e.g. replenishing your health) or detrimental (e.g. slowing your ship down) effects.

The only bad thing about Assault Wing is that there is NO computer player - you must always play against friends. But hey, if you play caveflyers regularly enough, you'd already have plenty of friends (or habitual enemies) to fight against ;) Excellent level and ship editors round off one of the best caveflyers you'll come across. Highly recommended! 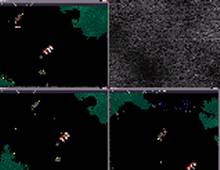