Another arcade game clone by E-Game, this time the victi-- err-- inspiration is Taito's Arkanoid. Instead of just ripping of gameplay directly from the arcade game as they have done in the past, E-Game this time includes some unique twists to the concept that will please fans of the original: you not only must bounce balls to hit the blocks (which in this case are dairy products made by Arla, the game's sponsor), but must also collect droplets of milk that fall down as the ball hits the packets. The game starts out slowly, but you will soon find yourself frantically moving to bounce 4-5 balls at the same time, and collecting multiple droplets of milk. The game ends once your milk tank is filled up or you run out of balls, whichever comes first. Overall, a fun coffee-break promotional gem from E-Game that bodes well for their future releases. 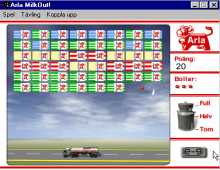