Akuji the Demon is an excellent freeware platformer from Japan that puts many commercial titles to shame. The storyline alone is already a twist on the familiar "hero kills foozle" plot: you play a demon (albeit a cute little one) who is seeking revenge on a hero who defeated you years earlier. To do this, you must venture into a deep labyrinth where the hero (who is now a king) has hidden 9 magic stones that sealed your power. Only when you recover all 9 stones will your full demonic powers return to ready you for the eventual fight with the hero.

The game plays like Konami's popular Castlevania series, but with more greater freedom of movement and many more interesting RPG elements. In fact, the game is very similar to another Japanese freeware called Ikachan (also on this site and highly recommended): you can collect 'mana stones' along the way that act like "experience points" in a typical RPG. Collect enough stones, and your experience level will increase a notch, giving you more life points. Each of the 9 magic stones you find not only gives you access to the new level, but also awesome new powers. These powers range from simple moves like super-high jump and flying, to more fancy ones like breathing fire and transforming into a ghostly form (useful for passing through walls).

Puzzle elements in the game mostly come in the form of "how to get from point A to B" variety: sometimes you have to use super-jump multople times in a row to get to high ledges, smash rocks that block your way, etc. Each level is huge: you can usually explore it in multiple directions, not only straight ahead (i.e. moving to your right all the time) as in most platformers. Sometimes you will need to backtrack to use the new power you gain elsewhere, but the game is not repetitive at all because there are always new enemies to fight, new clues to read, and new powers to discover.

Originally released in Japanese, a fanmade English patch has been released courtesy of D-Boy, so you will no longer have to figure out what the signs and characters are saying. With smooth, attractive anime-style graphics and a very enjoyable and refreshing gameplay, Akuji is hands-down one of the best platformers you will ever play, freeware or otherwise. Experts be warned, though: the game is easy even on Hard setting, and will take veteran gamers only 1-2 hours to beat the whole game - but at least you will have a blast while playing it. Highly recommended! 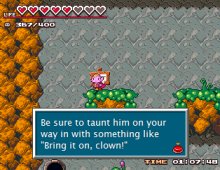