Probably the most famous ASCII-only game ever made and also the most ambitious, ZZT is the first release from Epic Megagames, a humble shareware developer that is now one of the best game developers in the business. The most amazing thing about this classic action adventure is not only that it's incredibly addictive (even with just ASCII characters running around), but that it features an amazingly robust built-in programming language called ZZT-OOP that allows you to build just about ANY kind of game.

As to what the game itself is about, here's what the Official ZZT Home Pagel says: "ZZT is an action/adventure game based on object-oriented programming. To complete Town of ZZT, you must master 43 game boards filled with creatures and ingenious puzzles. The game is very challenging and requires a good amount of brain power as well as fast reflexes." I wouldn't call the puzzles "ingenious"—most of them just involve running around the map finding the right keys to doors, while collecting various gems to buy weapons, torches to light your way, and ammo for your weapons. But as said earlier, the amazing ZZT-OOP language more than makes up for the lackluster game, and is the primary reason the ZZT community is still alive and well. Epic never released source codes to the game, so there are limitations as to what the utilities can do. That doesn't discourage die-hard fans to coding new programs altogether that improve upon ZZT in various ways: Megazeux, ZIG, and ZZT++, to name but a few, are excellent successors to ZZT's legacy. This is surely one classic that truly spawned a genre of make-your-own-ASCII-games, and a living proof of how great gameplay can be achieved even without graphics. It has recently been released as freeware, so there's no excuse not to try out this ASCII masterpiece and explore literally thousands of ZZT games around the Internet. 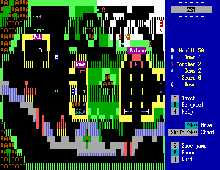 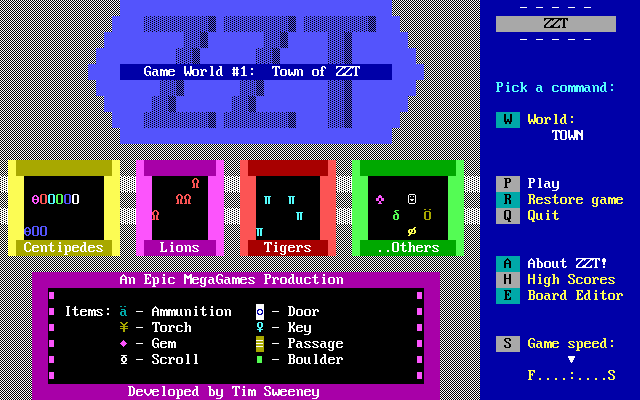