Although subtitled "A Text Adventure Game," Zyll is actually a revolutionary text-only RPG that introduces many concepts that have not since been seen together in one game. The basic plot: you have been transported to a distant land to recover the black orb and at least 4 treasures from Zyll, the evil sorcerer who destroyed your homeland.

So what makes the game so revolutionary and unique? C.E. Forman said it all in his synopsis of the game: "Jim Leonard of MobyGames called this one "a MUD before MUDs existed." It's an all-text RPG (even going so far as to include three classes of character to choose from), it's real-time, it allows two people to play at once (cooperatively or competitively), and it's highly randomized for replay value: Objects and monsters are placed differently in every game, much like the sample adventures in Delton T. Horn's excellent book Golden Flutes and Great Escapes.

The screen is divided into ASCII-border windows, and play is driven by single keystrokes rather than a parser (a necessity for the two-player simultaneous option), but there are lots of long text descriptions."

With three different types of characters to choose from (Warrior, Thief, and Wizard), high replayability, and some excellent fantasy writing, Zyll is a classic fantasy RPG that is well worth playing. 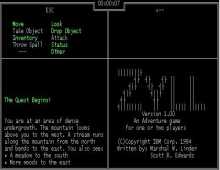