Zork Quest 2: The Crystal of Doom

ZorkQuest 2 picks up where ZorkQuest 1 left off: Egreth Castle and the land of Quendor once again found peace... but soon new troubles start brewing again after Moog, a mischievous young sorceress, stole an ancient spellbook that would give her powers unmatched by any other sorceror. It's up to a band of four brave souls, including the royal wizard Frobwit, to vanquish the evil once again. It's more captivating and longer than ZorkQuest 1.

Zork Quest 1 and 2 were part if Infocom's interactive comicbook range (Infocomics) and neither have much to do with the Zork universe as it is told in the original games.

Zork Quest 2 carries on from where the first game left off. The land of Quendor is at last at peace, but a sorceress has stolen a powerfull spellbook with which she intends to reak havoc on the land. It is upto you and your band of brave heroes to stop her.

Of the graphics and sounds it is hard to say anything positive If anything they detract from the story telling process, which is what makes Infocom adventures so good in the first place. The story itself is quite good (much more interesting and longer than Zork Quest 1), and it's probably best if you see this as an Infocom adventure lite. Play this, then go and play some of the other Infocom games on the site. 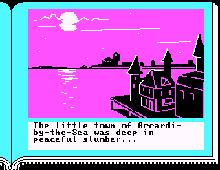 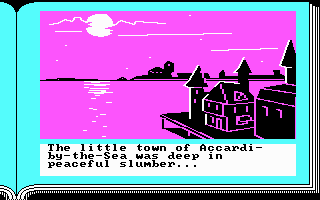