The last game to date by Istvan Pely, Zero Critical is definitely the best game out of all three games he designed (the other two being Majestic and Syn-Factor). Which is to say: it has an excellent sci-fi storyline and characters, but is unfortunately far too short and has puzzles that are far too easy. Farah Houston of the Games Domain says it all in her review:

"You are Chatt Rhuller, an agent of the Interstellar Transportation Commission (ITC). Even though you are a new recruit, you are sent to a planet called Rheom 1 to investigate a murder. There, in a research facility for a top-secret project, a scientist went mad and attacked the chief scientist, Dr. Victoria Fayn. She shot and killed him, claiming self-defense. You are sent to investigate because this is not the first time that someone has gone insane on that planet, although it is the first time that anyone has been violent. Some speculate that it is the constant daylight that drives people insane, but it seems that something more is going on.

Most of this information about the story is set up both in the manual and in the opening sequence of the game. I was excited about the plot as it seemed to be an interesting combination of science fiction and mystery. However, my excitement faded somewhat as I found myself on the planet and was able to figure out the all of the mysteries fairly quickly. The story held a lot of promise, and could have been excellent if it was longer. As it was, the game took me a little over three and a half hours to finish. This was barely long enough to develop any of the characters substantially or let the plot blossom out as much as it could have.

The game is driven almost entirely by the mouse, and revolves around the traditional point and click mechanics of most adventure games: collecting objects, using them, and participating in conversations with other characters by clicking on every conversation choice until you have no more to choose from.. Unlike a lot of adventure games I have played, the objects you collect have very obvious uses, and one does not need to rely on some sense of warped logic to solve the puzzles. If you find a computer interface terminal, you find the nearest conduit to use it in. It is that simple.

However, because each object has such an obvious use, it makes the puzzles in the game that much easier. They are almost too logical, as anyone with any amount of common sense should have no problems figuring out how to use items. Not only that, but the game world is fairly small - most of the action happens in a fraction of the possible areas to visit. This only helps to decrease the game time.

All in all, I do think that Zero Critical is an enjoyable game, and one that reminded me of traditional adventure games of the past. It is really too bad that it took so long to find a publisher, had this game been released a couple of years ago I believe it would have been much bigger in the game world than it probably will be now. If you want to pass the time with an enjoyable, albeit short, traditional adventure game, look no further than this one." 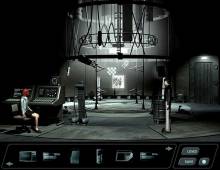 People who downloaded this game have also downloaded:
Sanitarium, Shannara, Lost Files of Sherlock Holmes 1 (a.k.a. Case of the Serrated, Legend of Kyrandia, The