The charming zaniness of Coktel's Goblinscontinues in Ween: The Prophecy, a game filled with wacky characters and sporting an improved interface. Unfortunately, the puzzles are often too obscure to all but die-hard puzzlers. The plot of the game is up to Coktel's usual wackiness: you are Ween, a hero who must complete three quests and to be rewarded with three grains of sand, which you then must place into a magical hourglass to vanquish the evil wizard Kraal and thereby fulfulling an ancient prophecy. But you only have three days to do it, and a lot of hairy puzzles to solve.

Those who have played Coktel's Goblins games will be right at home with this one-- except that many puzzles are very convoluted and -- having taken place in a fantasy world -- not at all clear. Worse, many objects have multiple uses which you must discover by trial-and-error since the game's descriptions are usually vague. For example, during the game you will come across some items that can be combined in your cauldron to create new substances. The problem is, you rarely know what each substance really does.

To the game's credit, there are often more things to do and more objects to manipulate in one Ween screen than in dozens of screens in other games. The game also branches in two occasions, thus allowing you to solve completely different sets of puzzles. There are also two methods of on-line help: your trusty bat sidekick, and your grandfather's friend Petroy, both of whom provide progressively explicit clues that range from gentle hints to specific directions. The downside is that they both require limited number of items to divulge hints, although you can of course "cheat" by saving and restoring.

Overall, Ween is a fun puzzle adventure that gets bogged down with too many illogical puzzles, poor writing, and incoherent plot. Those who like solving puzzles for the sake of puzzles will likely enjoy it, but anyone who enjoys a great story and character interaction in adventure games will likely find it frustrating. 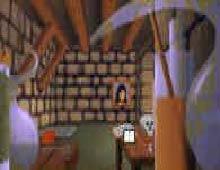