The plot of The Vortex Factor: "What is it? What secrets does it hold? The seeker of treasures through time and space must find out! From the coliseum of ancient Rome to the futuristic world of tomorrow ... join us in this unforgettable odyssey." 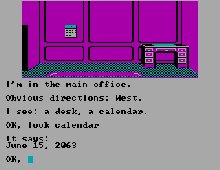 People who downloaded this game have also downloaded:
Peasant's Quest, Palace of Deceit: Dragon's Plight, The, Permanent Daylight, Perils of Poom, The, Starcross