Ultimerr is a small, but very enjoyable amateur adventure game. It is most of all a parody of the Ultima universe - but isn't restricted to just that. You will, for example, encounter quite a few familiar characters from other well known works, including some from a well known Alfred Hitchcock movie, some from an old children's tale, and some which will be kept a secret in this review, so as to ensure the enjoyability of them during the game itself.

The graphics, although not works of art, are exactly fit for the game. The backgrounds look like the kind you'd expect to find in most elder RPG games. The same goes for the characters, inventory items, and well... the entire game.

The puzzles are on the easy side. You shouldn't have any trouble solving them in most, or all, of the cases. This again, although probably not on purpose, is something which it has in common with most console RPG games. Some puzzles are quite original, or provide humorous situations between NPC's and the PC. Which is, more than anything else, the point of this game.

The story is a collection of RPG clichés. You are Avatar, a good knight who has just arrived in town. Upon arrival, you discover that a bad person had kidnapped a good princess. Being the hero that you are, you decide to free her. But to do this, you have to find three gems which will create a portal to his lair. Sound familiar? Well, if it doesn't, then you probably just never played an RPG before in your life.

The game pulls off this old, worn storyline with grace, though. The game is refreshing and original in most departments, so even though you always have a faint idea of what will follow, the game still manages to surprise you at how it is executed. Again, the strong humor and good dialogue in the game are the strongest points, and are in fact what the game revolves around.

The only negative point I can find is, as stated before, the very short length of the game. You'll left wanting a lot more. But other than this, this is a game worth playing by almost everybody with an interest in funny games and/or RPG games. 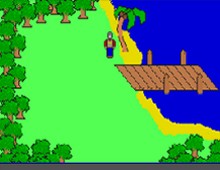 People who downloaded this game have also downloaded:
Time Quest, Perils of Poom, The, Sanitarium, Palace of Deceit: Dragon's Plight, The, Trick or Treat