UFOs (released as Gnap in Europe) is a fun point-and-click cartoon adventure in the same vein as Toonstruck, except a lot shorter and not as clever. Gordon Aplin's review at Quandary says it all:

"Gnap is a one-eyed, purple sausage-like alien who crash lands in a pigpen somewhere in the Ozarks. In need of parts to repair his space ship, he sets off to explore his surroundings. He is soon joined by of all things a platypus who, despite suffering some necessary but violent mishaps, refuses to be separated from Gnap. Between them, they might just get Gnap out of here.

The game scenes fill the screen (every game should do this) and like most things animated are colourful and expressive. Not as vibrant as Stupid Invaders, but good to look at nonetheless. The denizens of the Ozarks are a motley hillbilly bunch, unattractive in both looks and temper. Even the animals pack a punch - or a peck. Only the pigs seem to lack the capacity to strike back. The bar room bikers are only slightly more appealing. The occupants of Cityville are somewhat more wholesome, but largely by comparison. However the freak show/dance party in the final scenes takes the cake.

There is a lot of comic violence in this game. Do the wrong thing and you are likely to end up with at best a poke in the eye or a punch on the nose. Do the right thing and occasionally that means being eaten or diced, or even the demise of another character. It's been going on since Bugs Bunny and Daffy Duck, but its more graphic here, and if that sort of thing is not to your liking then stay well away. You can talk to characters, but you won't understand a word Gnap says. He makes strangled breathy noises, accompanied by a swelling of his cranium. Perhaps he is communicating by telepathy. Whatever it is, you are well advised to persist, as some of what is said to you, and the actions that follow, are crucial. You cycle through a minimal set of cursors with the right mouse, and "use" them with the left mouse. If Gnap can't do what you ask he will shake or scratch his head. If he can, a short cutscene will usually take place. A zappy remote control looking thing in the top right corner contains your inventory, and all other menus. It's quite straightforward. One of the cursors is for platypus action. Use it, and your platypus pal may lend a hand, or some other body part. Other platypus interactions are possible; make sure you try and get Gnap to "take" him. Now and then Gnap and the platypus will have to work as a team.

It's essentially an inventory quest, and it will occasionally come down to using every item in every spot to get a result. At least it did for me. However you only ever have a limited set of scenes and items, and you will be able to work out most things logically by paying attention to small details. All up, it is not that difficult a game. There are three arcade sequences in the game, plus you can play Space Invaders at one point. The arcade sequences are in keeping with the tone of the game - in one you need to collect road kill, in another you must win at tongue fighting. The latter is probably the only difficult one, more frustrating than complicated. You have to win twice to advance, and it may well take you quite a few attempts. Most game scenes have actions occurring simply for the hell of it, either as a result of an attempt by Gnap to do something, or all by themselves. The former will usually involve violence, or the threat thereof.

I found the whole thing amusing, at times tastelessly and even offensively so. It reminded me most of Stupid Invaders, albeit much shorter (a couple of hours at the most). If you liked that game, and/or perhaps Duckman, you should get a chuckle (and a grimace) out of this." 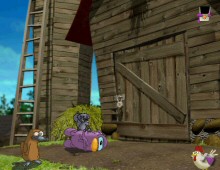