A great amateur game that is an obvious spoof of LucasArts' Indiana Jones and the Last Crusade, Udoiana Raunes stars the bumbling archeologist professor of the same name who must find a way to escape the students' (!) blockade in a school-wide protest that sent many professors scurrying for cover (hmm, now we know what the designer thinks of HIS school....). The game plays like a standard LucasArts' game, with rows of verbs representing actions you can take, and icons representing inventory items on the bottom row. The writing, perhaps owing to the fact that the game was originally German, is spotty, and the humor doesn't come across very well. The game more than makes up for this deficiency with a lot of fun puzzles, though, some of which are quite creative (the ones involving a parrot, in particular). It's also much longer than your average homemade adventures, so anyone who finds Larry Vales too short (just about everyone) will find this a pleasant surprise. Overall, Udoiana Raunes is a competent effort that's well worth a look by Indiana Jones fans and fans of adventure games in general. Be prepared for some cliche humor and a very predictable (some would say innane) plot, though. 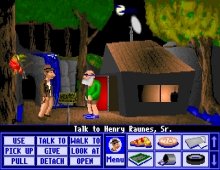 People who downloaded this game have also downloaded:
Out of Order, New Adventures of Zak McKracken, The, Maniac Mansion Deluxe, Shannara, Trick or Treat