Two of a Kind

Two of a Kind is a fun freeware point-and-click adventure game from Epileptic Fish, a team of talented designers lead by Dave Gilbert. Excerpts from the thorough review by Berian Williams explains why every adventure fan should check out this game:

"Two of a Kind was originally intended as an entry into this July/August's AGS Team Competition, wherein groups of AGS community members banded together into teams of 5 members and raced to create a game together before a set deadline. The competition eventually fell apart, due to various people dropping out, and the time constraints being a little too strict. However, two teams did continue their games after the deadline ended; one of those teams was Epileptic Fish, creators of Two of a Kind. The game eventually took almost two months past the original deadline, but the finished product was well worth the wait.

The game revolves around twin brother-and-sister Tim and Tiffany Walters. Together they work as private detectives, in the city of Bluff City. Bluff City isn't your ordinary city though, there was a meteor strike some 700 years ago, which had strange effects on its inhabitants' evolution. Many of the city's residents have strange, supernatural powers. Tiffany, for instance, can talk to animals, while Tim can levitate a few feet off the ground. At the beginning of the game, Tim and Tiff are contacted by the curator of a local museum, who charges them with investigating the theft of an ancient Egyptian artefact. Of course, given the unusualness of the rest of the city, things are not quite as simple as they'd seem.

[The] partnership makes for an excellent variety, since you can swap between Tiff and Tim at any time, with different responses to every hotspot interaction. The GUI is of a standard Sierra icon style, where the interaction is chosen from a docked panel at the bottom of the screen. To the right of the inventory is the all-important special ability button. This will allow Tim to float (if you have him selected, of course). Tiff's ability to speak to animals is automatically selected whenever you try to talk with one, so no special button was required. There are also a few other tricks that show a level of programming prowess that is rare to find in amateur-created adventures, such as a scrolling X-Files-style typewriter effect that shows the location name when you visit a new area.

The plot progresses excellently, from the initial robbery investigation through to the eventual, far more sinister conclusion. Nothing is obvious at first, with the story moving forward evenly. Although the ending is hardly unexpected (it's fairly obvious from the final quarter onwards what's going to happen), the way it's accomplished is excellent, and serves as a good culmination of the game. Strong dialogues and excellent writing are a hallmark of writer Dave Gilbert's work, and this game does nothing to reduce his reputation. All-in-all, Two of a Kind is a very professionally presented game, with few flaws (apparently the game was quite buggy for some people, but I personally found no problems playing it). The extra three months Epileptic Fish spent polishing and finalising the game were used well, and the finished product is an excellent, well-rounded game, with an attention to detail that's rare to find in amateur games." 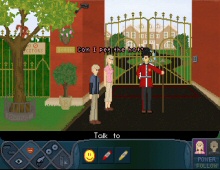 Two of a Kind screenshot