The plot of Trekboer: "This exciting adventure begins abord the starship TREKBOER in the 21st century. Life on Earth is threatened by a deadly virus and your mission is to search the frontiers of space for the cure that will save mankind from disaster. But how? Where? The name of your starship provides the first clue." 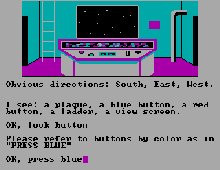