One of the rarest games ever made - for PC and other 8-bit systems - is First Row's first release, and one of the first "space opera" adventure games that StarFlight would take to new heights. In Star Empire, you basically pilot a starship from an overhead perspective, shooting baddies and taking various missions on cue from the game. Game mechanics is very simple, and vector graphics makes it look like a souped-up version of Space War. Still, as a pioneer of space adventure games, Star Empire deserves its place in the annals of computer gaming - although its influence is debatable because the game is so obscure, even in 1988. Recommended as a nostalgic trip for die-hard fans of space games. 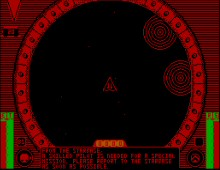