Sign of the Sun is a decent adventure game that unfortunately descends into mediocrity quickly after a fascinating intro and never quite recovers. The best thing about the game is the interesting plot: in the near future, several nuclear disasters have pushed the Earth much farther away from the sun than before. As a result, global temperatures have risen precipitously, new deserts have been formed and now cover over thirty percent of all land mass. Since new deserts are being formed every year, mankind needs to establish itself on these barren deserts or facing certain extinction. Amid this backdrop is Morium, a metal ore discovered by a mining corporation that seems to offer protection against the extreme radiation and heat of the new deserts. But before it can be safely used, Morium needs to be tested in the sun - the cradle of life and the ultimate extreme which will give a definite result on the Morium's qualities. You play James Mariner, a test pilot who has been chosen to pilot the Firefly, an experimental craft plated with Morium and modified to test the ore. Your mission is to deploy a probe within the sun's corona and monitor the results. But as usual with 99% of all adventure games, things did not go according to plan, and you find yourself confronting a strange alien civilization and the menace they left behind.

Sign of the Sun is a mostly typical adventure game in that you pick up objects and use them in appropriate places. The difference is that similar to Omikron or Alone in the Dark, action plays a big role in the game: you will have to punch and kick your way through many portions of the game. Unlike those two games, the action interface in Sign of the Sun is badly designed to say the least: you are forced to use only the numeric keypad to kick or punch, and despite many tries I find it very awkward to use. Worse still, one of the game's most annoying action sequences takes place right at the beginning, thereby giving a poor first impression to the gamer.

If you are patient enough to get through the first few awful minutes, though, the game improves considerably until it gets worse again. You can use the mouse for normal adventuring portions - left click to interact, and right click to bring up short descriptions. Unfortunately, the puzzles are not terribly interesting to solve - think of the puzzles in Indiana Jones: Fate of Atlantis, minus the cool backstory behind any of them.

Die-hard adventure gamers will likely find Sign of the Sun merely an average adventure game that could do much more with the fascinating plot. Recommended only as a "novelty" kind of game - and if you simply must play every adventure game ever made. 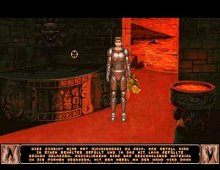 People who downloaded this game have also downloaded:
Shannara, Ringworld: Revenge of The Patriach, Lost Files of Sherlock Holmes 1 (a.k.a. Case of the Serrated, Prisoner of Ice, Realms of The Haunting