Operation Polaris was going smoothly; the mysterious crates were safely stored under freezing temperatures in the hold. It looked as though the submarine was going to make it home for supper. Suddenly, a ship is spotted on radar. It launches depth charges all around the submarine. One explodes too close to the hull and starts a fire in the electrical systems on board. The fire races to the hold, thawing one of the crates. Then things took a turn for the worse...

Created by I-Motion (Infogrames' short-lived label), Prisoner of Ice is the sequel of sorts to Shadow of The Comet that unfortunately doesn't live up to its predecessor despite sporting better graphics and a more expansive plot. You are Lt. Ryan, an American agent stationed aboard the submarine H.M.S. Victoria on a rescue mission in the Antarctic. Before you know it, the Captain is eaten alive by the mysterious cargo, leaving you to deal with all sorts of horrific creatures.

It is simply unfortunate that the designer could not pull off the gameplay to match the game's outstanding H.P. Lovecraft-inspired plot. The worst offender is the extreme linearity that severely hampers the game: the game is chock full of generic responses such as "you can't do that," even for actions that do make sense. Often you will need to go back to previously explored screens to find new objects, which mysteriously appear only after a certain event occurs (the infamous, tiny pin is a case in point). I couldn't count the number of times that I was stuck for several hours, slowing running my mouse across the screen, looking for that one-by-one pixel object I might have missed earlier. This also greatly spoils the game's sense of urgency: in real life, is that hideous monster really going to wait patiently for you to find the single object that would kill it? Uhh, I don't think so. Worse yet, some puzzles are so illogical that you don't have any idea what that object you need is supposed to be. Instead, you just have to search every room, top to bottom until you find what you need.

This is all rather unfortunate, because the plot of Prisoner of Ice is one of the best ever seen in a horror adventure, and it is well-paced. When it moves along smoothly, it is a lot of fun to play. Unfortunately, that doesn't happen often enough, and even with a lot of frustrating pixel-hunting, the game is over way too soon. Worth a try for horror fans, but don't expect the gripping experience that Shadow of the Comet offers. 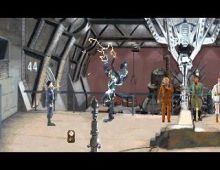