ShadowForce is a decent sci-fi adventure game published as shareware in 1994 by MVP. You control a four-person "ShadowForce" team, futuristic police force who has been called to investigate a space station called Icarus. Similar to 90% of other sci-fi stories, you discover that something went wrong immediately as soon as you arrive: dead bodies everywhere, and crazy security robots bent on killing everything in sight. You must find the reactor and shut it down before the station explodes, then go on to solve the mystery in the next two episodes that were available only in the registered version (which is what you can get here, of course ;))

Although you can control four agents in the game, ShadowForce is basically an average point-and-click adventure with a more cumbersome interface than most. The four agents are there mainly to increase available inventory spaces, and increase your chance of survival when fighting robots and worse. Fighting in the game is more boring than fun: just repeatedly click the USE cursor on the gun in your team members' hands, and hope you hit the enemies more times than they hit you. The adventuring portion is better: you will explore the station, take anything that isn't nailed down, and use futuristic gadgets. Unfortunately, most puzzles are mundane, involving little more than "find the right security card X for door Y" variety. One thing I like is the fact that anything you can interact with in the environment is shown separately on the right side of the screen - no more "hunt the pixel" frustration here. Too bad the rest of the game - writing, puzzles, and annoying combat - did not live up to the few sparks of innovative interface. 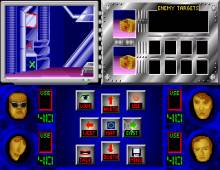 People who downloaded this game have also downloaded:
Shadow of The Comet, Time Quest, Realms of The Haunting, Sanitarium, Prisoner of Ice