If you haven't met Seymour before, imagine a relative of Dizzy the egg, who lives in the real world. He's a sort of slug-type thing, who wanders around with his little eyes blinking and his little hands waving (yes yes, I know slugs don't have eyes and hands, but if you could imagine one that did). He scrolls his way through life jumping over things, collecting them, working out puzzles and trying not to get killed. And in this, the first of the Seymour escapades, the little sluggy fellow has zipped off to Hollywood. Why? It's difficult to say, really. There must be a place in a film for a talking slug with hands and big shoes. But even if Spielberg or someone is contemplating a version of ET or Indiana Jones starring a gastropod (look it up) it's not going to be too easy for our little white chum to become a top idol. Firstly, he's actually got to get into the film studios by somehow proving to the big and dangerous security guards that he is the famous Seymour. It's difficult because, like us, nobody in Tinseltown has ever heard of him either. But if you can find him a pair of dark glasses, he'll look exactly like Jack Nicholson (or Madonna or someone), so he should have no trouble getting in. His hassles are only just beginning though. Once actually in the studios, he's got to get through the maze of equipment and he's even got to be able to talk to the stars (who are notoriously dim, as we all know). It's a real problem, especially when you're trying to communicate with Tarzan!

All the usual CodeMasters tricks, traps and head-scratchers have been included in the game, as well as a couple of nasty pranks (but strangely, there aren't any teapots), I spent hours trying to get Seymour across a frighteningly busy LA road only to find that it was impossible, and I should have set off in the other direction. Arrgghh! I said (it's true, he did. Ed). But once you get into the swing of things, Seymour, like the Dizzy games it resembles, is completely brilliant. It's packed with great graphics, it's got a kickin' soundtrack and it's very, very playable.

As it's set in the real world, Seymour Goes To Hollywood is a bit more logical than some of the Dizzy games. The general formula is pretty much unchanged from the Dizzy days though. There are lots of objects (which you won't know what to do with) and there are lots of problems to solve before you can proceed. Use the correct objects with these probs and you can get past. It calls for a bit of grey-matter exercise, does this. There are 96 stonking screens, each one packed with detail, colour and things to jump up and down on. You pick up or drop things using the RETURN key, which also triggers the objects in your pockets as well. So if you find a key, hit RETURN to open a locked door. Easy enough, so you don't need to bother with typing in commands or anything. 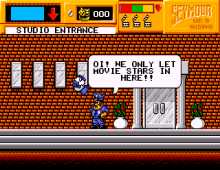