Sentient is an ambitious first-person adventure game from Psygnosis that features many interesting innovations, but the game is bogged down by poor execution and a frustrating user interface. Stephen Poole's comprehensive review at GameSpot explains it well:

"The basic idea behind Sentient is a very good one: to make you one of the crew of a space station that's in extreme peril. Executed properly, it could make for a compelling experience - but unfortunately, there's very little about Sentient that's done well.

Set in the distant future, Sentient casts you as medic Garrit Sherova. You've been assigned to the Icarus, a huge "corona raking station" that mines subatomic particles called Kenyons, which are the most powerful - and among the last - energy sources known to mankind. Your mission gets off to a rocky beginning as your shuttle crashes into the Icarus' docking bay, but that's just the start of the troubles on the Icarus. For one thing, the Icarus is a regular cosmic Peyton Place - crew members are openly suspicious and hostile toward each other, with some harboring a growing belief that the medical staff is using them as guinea pigs in drug tests. The captain's been assassinated, more and more of the crew are falling prey to a mysterious radiation illness, and last but not least, the station is being pulled into the sun it's orbiting.

Probably the most interesting thing about Sentient is that it does make you feel as if you're onboard a space station. As you roam the decks from a first-person perspective, you'll see crew members going about their business or chatting with one another, and you can stop and talk with (or eavesdrop on) any of them. Another intriguing feature is the ability to change your attitude when talking to characters - hit the H key (for happy) repeatedly when conversing, and you'll see a broad grin begin to form on the "mood indicator" at the bottom of the screen; hitting the S (sad) key causes Sherova's face to scowl in an expression of anger. And with so many subplots, you certainly can't say Sentient doesn't give you a lot to do: You've definitely got your work cut out for you, if you hope to resolve all the mysteries and save the Icarus from destruction.

The catch, though, is that Sentient plays and feels just like that: work. The main culprit is an incredibly cumbersome dialogue menu system - just asking a character where a particular crew member's quarters are located involves making five or six menu selections. And while this complex system makes for a huge number of possible questions, finding a way to ask a question you really need answered is often simply impossible because the structure of the dialogue menu doesn't allow for it. When a character tells you he's concerned about the doctors injecting crew members with stimulants, for instance, there's no way for you to ask him who was injected or which doctors were involved, or what happened as a result of the injections. Another character might tell you that "Bartle is a big idiot," but when you ask him immediately after that statement what he thinks of Bartle, he says, "I have no opinion of him." Situations just like these pop up all the time, and what should be fun turns into an exercise in frustration.

A bigger problem is that these characters are about as sterile as you'll find in a game. They walk like people, they look like people, but they sure don't talk like people. Amazingly, there's no spoken dialogue in Sentient: All conversations are displayed in cartoon-style text bubbles, and the stuff that appears in those text bubbles will have you scratching your head. If you ask someone who he is, you'll get responses like "I get called Bor Gunny" or "I am often called Trini Gallahi." Anger someone with an insult, and you might have to endure a withering comeback like "Eat my feet!" or "You smell like a deep space pilot." With writing this mediocre and no voice acting to give the characters personality, Sentient turns into a routine of fact-gathering rather than exploration and interaction.

And the annoyances go on and on. Text descriptions rather than icons are used for inventory items, which leads to yet more menu selections. There's no way to name saved games (they're identified by your location on the ship at the time you saved), and you have to click up and down arrows to move to the correct save/load position instead of simply clicking the saved game name with the mouse (the mouse does work for the first saved game you load, for some reason). The ship layout is confusing, and you'll wind up doing so much virtual walking just to run a simple errand that you'll soon grow tired of the whole affair.

The premise behind Sentient is admirable, and there will be some very patient gamers who get so wrapped up in solving the mysteries that they'll look past the wind-up characters and clumsy interface."

There are many innovations in Sentient that adventure developers should take a look. Among these are: multiple endings (nine in all, if memory serves), an excellent conversation engine that allows near-limitless question possibilities, and an intriguing sci-fi mystery plot. Too bad all of these are buried beneath a host of problems highlighted in Mr. Poole's review. Recommended only to die-hard adventure fans who are patient enough to overlook these major faults. 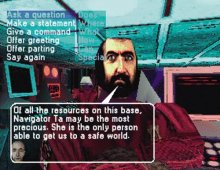 People who downloaded this game have also downloaded:
Shadow of The Comet, Prisoner of Ice, Lost Files of Sherlock Holmes 1 (a.k.a. Case of the Serrated, Realms of The Haunting, Sanitarium