Seiklus is a superb adventure game that is hard to describe. Imagine a cross between Out of This World, Below the Root, and Super Mario, and you will have a vague idea of what the game is like - although you would have to play it to see how unique the game really is.

The designer calls Seiklus an "exploration game," and this is very accurate. The game is more linear than Noctis in a sense that you have an overall goal: to rescue your girlfriend who has been kidnapped in the introduction. But how you get there is largely up to your own exploration and keen observation. There is almost no plot advancement to speak of - you just explore new areas, try to collect as many colored pieces as you can, open up all the treasure boxes you can find, and find out what the treasures actually do. But the charm of the game lies in its wonderfully immersive atmosphere, which is created partly by minimalist cartoon-style graphics and partly by a great gameplay design: the more you play, the more you will discover new items and puzzles, like dangling a carrot. Puzzles are not difficult to solve, but they are all interesting - most are reminiscent of the "real-world" puzzles in Out of This World which require no inventory, only good eye for detail.

I find Seiklus to be an absorbing, very beautiful game that manages what very few adventure games can do: immerse you into its world. Fans of traditional adventure games may be dismayed at first to find that Mario-style jumping and collecting pieces is crucial to finishing the game, but Seiklus is far from being a typical Super Mario clone. Just when you think you have seen everything in the game, Seiklus will surprise you with yet new areas and items. Some parts are a bit repetitive (especially the underground cave), but the payoff is rewarding enough to warrant the amount of patience required. Truly one game that deserves to be called a "work of art." A must-have. 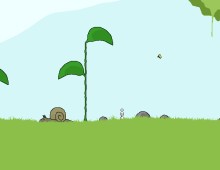 People who downloaded this game have also downloaded:
Sanitarium, Shannara, Shadow of The Comet, Lost Files of Sherlock Holmes 1 (a.k.a. Case of the Serrated, Realms of The Haunting