The plot of Sea Search: "Get your shark repellant and scuba tanks ready! The underwater scenes in this adventure are unforgettable. You'll run into a pirate, a mermaid, and some hungry sharks in this colorful and unique treasure hunt." 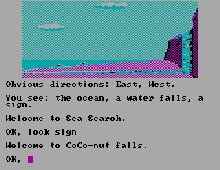