Pirate Fry 2: The Hand of Anturus

Pirate Fry 2: The Hand of Anturus is a funny and well-crafted amateur adventure game that is reminiscent of Monkey Island in many ways, not least of which is the pirate-y setting. Curiously released after Pirate Fry 3, the game is the best in the series, offering solid graphics, plenty of puzzles that are fun to solve despite being on the easy side, and a great sense of humor.

Pirate Fry 2 can be played as a stand-alone game - you don't need to know anything from the first game to finish this one. Fry, the bumbling hero, finally gets his wish to become a pirate in the first game, and starts off this new adventure dozing off in his decrepit cabin. Once awake, it is down to the pirate guild where he was assigned the task of capturing the legendary Hand of Anturus.

The game uses the standard point-and-click interface that will be familiar to anyone who has played classic LucasArts games. There are plenty of puzzles, most of which are easy to solve but are all logical and fit in with the story. The game is funny throughout, thanks to solid writing especially of Fry's funny remarks. There is even a fun (and thankfully not too difficult) action sequence and a test of skill to make the experience more diverse. In contrast to most amateur games, the graphics is well-drawn and detailed, although I wish there were more specific descriptions or interact-able spots in each room. All in all, a fun fanmade adventure that is well worth a look to fans of Monkey Island games. It is not as funny, but it comes close. 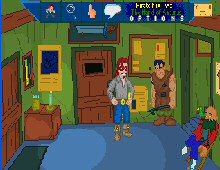 People who downloaded this game have also downloaded:
Out of Order, Lost Files of Sherlock Holmes 1 (a.k.a. Case of the Serrated, Shannara, New Adventures of Zak McKracken, The, Maniac Mansion Deluxe