If you ever wondered what an adventure game would look like, had Ed Wood crafted one all by himself, then playing RON: Nihilism will probably solve your question. This is not an easy game to describe otherwise.

The game does not really fit in well with the other RON games. It has no plot to speak of, two very strange puzzles, and ... no ending at all. Indeed - there is no possibly way to finish the game. Once you have solved the two puzzles (by trial and error, because the connection between the problem and the solution of the puzzle is very far fetched), your game is over. You can still run around the town for as long as you want, but nothing more will happen to the story.

The scripting to this game is horrible, the dialogue is confusing, the main character looks like a prop from a horror movie, and you will probably get a headache if you play it any longer than thirty minutes. However, it is precisely because of all that, that this game is irresistibly funny. It had me laughing out loud quite a bit.

If you are looking for an adventure that gives you a feeling of accomplishment after you've solved a puzzle, or finished the game... then by all means, stay as far away from this one as you possibly can. If however you are looking for a good laugh, and wish to see for yourself how bad it really is, then by all means, give this game a try. It's an experience you won't easily forget... 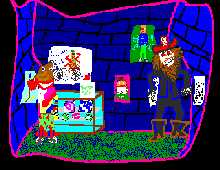