RON 3 is the longest game in the series so far. It features the same protagonist as the first RON game: Davy Jones. This time his magical ring has been stolen by two Russian spies, and his quest is of course to retrieve it. This is probably the most difficult one of the three - it certainly has more puzzles than its predecessors - so it may take you a tad longer to finish. Be ware of some minor glitches in this game. They should have been ironed out in this version, but it probably wouldn't hurt to save frequently anyway.

If you download this game, or any other RON game, you should be aware that you're not getting a lot of gameplay for it. You will, however, be adopting a small fun game that has lots of brothers in the pipeline, and a rather alive atmosphere. And well... it's fun playing a short adventure game which you know you'll certainly finish. 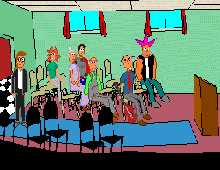 People who downloaded this game have also downloaded:
RON4: I Spy, RON1: Lunchtime of The Damned, RON2 1_2: Fowl Play, RON2: Vengeance of The Chicken, RON6: Blastoff