RON2: Vengeance of The Chicken

RON2: Vengeance of The Chicken features a quite uncommon protagonist - A large chicken. A hired assassin has murdered his brother, and he vows revenge-by tracking the assassin down and kill him. Quite a Shakespearian theme to this game-indeed, Macbeth would be proud ;) The game succeeds quite well in being humorous, and is a tad longer than its predecessor.

Music is, apart from a very short Reality on the Norm theme song, all unoriginal. They're all MIDI, and they all sound quite neutral. They shouldn't annoy you. 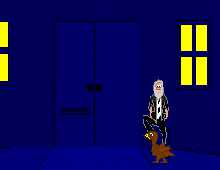 RON2: Vengeance of The Chicken screenshot