RON1: Lunchtime of The Damned

RON1 centers around Davy Jones, a student mage, who by accident summoned a zombie and must put him back to sleep. The puzzles are, although few, rather good. They shouldn't give you any trouble. And if they do, you won't have to look long for the solution as the setting is limited. Music is, apart from a very short Reality on the Norm theme song, all unoriginal. They're all MIDI, and they all sound quite neutral. They shouldn't annoy you. 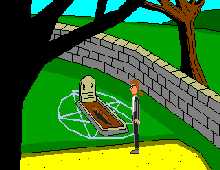 RON1: Lunchtime of The Damned screenshot