In RON: Blastoff, you play Elandra, Davy Jones' girlfriend - on a quest to help somebody build a spaceship. It's a rather confusing plot... but in the end, it works well. The graphics in this game are among the best in the series... and the game is pretty long. Puzzles are also nicely laid out, and of an average level - with the exception of one rather cruel puzzle. Overall, this game does not stand out in any department, but also does not disappoint in any. 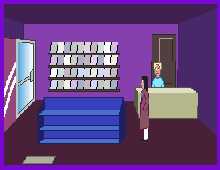