RON4: I Spy is in my opinion by far the best game in the series. The plot advances smoothly, the graphics have been improved over it's predecessors, and the game even features a form of multiple endings - thus adding some replayability to it. The game tells the story of a female tabloid reporter, named Mika Huy, who has heard rumors of Bill Cosby being killed in the town of Reality and wishes to investigate them for herself. The game is won after you successfully take a picture of Bill's corpse, but there are three non-vital subquests to be completed as well. Each one involves you taking a picture of something irregular, to sell for large sums of money to the tabloids.

If you download this game, or any other RON game, you should be aware that you're not getting a lot of gameplay for it. You will, however, be adopting a small fun game that has lots of brothers in the pipeline, and a rather alive atmosphere. And well... it's fun playing a short adventure game which you know you'll certainly finish. 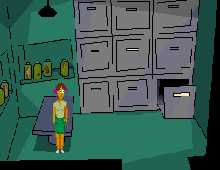