One of the best cult classic films ever made based on the theatrical smash hit of the same name, The Rocky Horror Show is undoubtedly one of the most remarkable worldwide media phenomena in the last 20 years. This campy rock and roll story of boy meets girl meets alien transvestite from another world has been turned into a game, which unfortunately received much less attention than the film. Games Domain says it all in the comprehensive review of this cult classic old game: "

The basic premise is similar to that of the stage show and film - a couple of clean-cut American teenagers, the kind you'd find in any fifties B-movie or sitcom, find themselves at the castle of one Frank N Furter, an alien transvestite mad scientist, and his strange servant. But unlike the stage show or "fillum," Brad and Janet are separated before they step through the door - with one of the pair being kidnapped by Dr Furter, taken inside the house, and turned to stone using the Medusa Machine - as is explained in the game's intro. Playing as Brad or Janet, you have to enter the house and de-medusaize and rescue your petrified partner and make it out of the house before it turns into a spaceship, taking you to the planet of Transsexual, Transylvania, to a fate worse than every other fate you could think of. You have only half an hour, in real time, in which to accomplish this, so time is of the essence - it's down to you to make sure Brad and Janet make it out of the castle in one piece.

In order to make good your escape, you have to solve a number of puzzles while avoiding the residents of the castle who will rip your clothes off or blast you in the face given half the chance. If you do get blasted, then you lose about five minutes from the half an hour you have to escape the castle (time can be made up by picking up the red lips scattered around the house) and have to make your way out the medical room. Escape largely entails taking objects from one area of the castle, and using them elsewhere, giving you another object to use in another room, and so on - that sort of thing. The puzzles are slightly unusual - which is appropriate as The Rocky Horror Show isn't exactly a run of the mill Gilbert and Sullivan style musical, so you can expect to have to deal with a biker in the castle's freezer, activate an Elvis Bot, demonstrate your Timewarping abilities and tackle many other off-beat problems, which require both logical thinking and imagination to beat. You guide Brad and Janet through the mansion with the cursor keys (we don't take kindly to mouse users round here squire), using the space bar to pick up objects, the keys to pick an object from your inventory, and the key to use said item. It has to be said that this mouseless approach does feel a little fiddly at first, especially when you have to manoeuvre round tables and other objects as you cross the rooms, but you do get used to it eventually." As well as exciting and original gameplay, the game features a host of unreleased 70's tracks and exciting 90's remixes to go along with the action. Fans will be happy to hear that the game is very faithful to the film, featuring all the offbeat humor fans have come to know and love, including Richard O'Brien as the Game devil and Christopher Lee as the narrator. Special rerecorded soundtrack, video sequences, and over 60 locations to explore make The Rocky Horror Interactive Show a fun romp that will take you some time to finish, and may even inspire you to watch the movie if you've never seen it. Some puzzles are obscure, but the weird and wacky atmosphere more than make up for this nitpick. 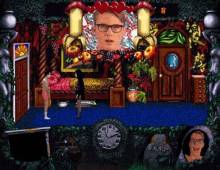