Razors in the Night

Razors in the Night is a fun amateur adventure that offers a fun plot and the length that rivals the best commercial games. You play Knox, a punk member of a local gang who is running from the police after a rough Saturday where Knox and friends may have crossed the line between prank and criminal behavior. The game features a lengthy intro, dozens of well-realized locations packed with interact-able objects and NPCs, good cut-scenes, and plenty of fun puzzles.

The graphics in Razors in the Night are bright and colorful - the psychadelic colors are perfectly suited to the subject matter. Although I found them garish at first, it becomes quite cool and appealing once I got used to it (even that constant rain, which is annoying at first, becomes rather cool when I look at it long enough). Solid writing, especially of the dialogue when Knox speaks to gang members and other cool characters, is compelling enough to make you want to finish it. The game is also much longer than most freeware games - you will likely spend between 15-20 hours with the game, which is much more than an average commercial adventure these days.

I have only a few complaints with the game, neither of which is major. First, the interaction icons are far too big, and the lack of "hotspots" (like the starry dots in Gabriel Knight that tell you the exact pixel each click of the icon will be interpreted) makes it difficult to tell whether you are clicking on an interact-able object on screen or not. Second, the "transition hotspots" between each screen are sometimes too small - there are more than a couple of locations I missed at first, because I was not standing in the right 10x10 pixel area that would trigger the transition. Lastly, there is a fair amount of pixel-hunting in this game, so expect to spend a lot of time "combing" each screen for objects that you can pick up or interact with. But these complaints pale in comparison to the wonderful plot, writing, and the plethora of puzzles that will amuse and challenge every adventure fan. If you love punk and long games or either of this, you will probably enjoy this "labor of love" from a lone designer. 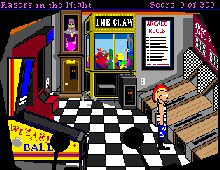 Razors in the Night screenshot