The Hulk is a disappointing first instalment of the Questprobe series from Adventure International, which was produced in collaboration with Marvel Comics. Despite a 'Difficulty level: Moderate' tag on the box, the game is not only very easy, but easy in the most stupid way a game can get. The game starts with you, The Hulk's human alter ego Bruce Banner, tied to a chair. After an easy escape (well, at least easy for anyone who has read the comics), you learn that the goal if this game is to locate all the gems and find somewhere to store them. Yes-- this is another sad, superhero-turned-pointless-gem-hunter kind of game.

Although the game does try very hard to immerse you in The Hulk's world, nothing aside from the well-drawn graphics ever did the job. The worst offense is the parser, which you'd swear is dumber than a rock. It understands very little other than "LOOK," and puzzles are more boring than they are worth. The appearances of well-known bad guys such as the Chief Examiner and Ant-Man are wasted by poor writing and pointless dialogues. The game does try to help: typing HELP is supposed to give you clues, but most of the time you'll be greeted with annoying "SORRY I CAN'T DO THAT BUT ASK FOR A SCOTT ADAMS HINT BOOK AT YOUR FAVORITE STORE!" response. My biggest gripe with the game is the repetitiveness that sets in after you know your objective. As you move around collecting gems, each of the three domes becomes indistinguishable as they are represented by the same graphic! Worse, you must follow the same painstaking, pointless routine to leave each dome.

This is a very disappointing game, especially considering that Scott Adams' other games are quite good. A horrible waste of a good license-- steer clear by all means. 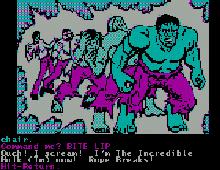