Fantastic Four is, thank goodness, the last and best (in a relative sense) game in the short-lived Questprobe series which was a collaboration between Adventure International and Marvel Comics. This time, you control the entire Fantastic Four team, each of whom has unique special powers. The game engine was expanded to handle 2 protagonists at a time, and the parser is much improved, although it is still the standard verb-noun engine. Most puzzles require figuring out which superpower is appropriate in the situation, and collaboration among the team members. Insipid find-item-X-to-give-to-Y-to-get-item-Z puzzles still abound, but there is a lot less of them than in The Hulk and Spider-Man, the first 2 games in the series. 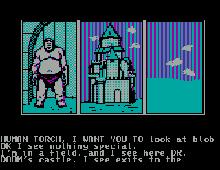