Although widely hailed as the worst film ever made, Ed Wood's classic camp horror film of 1958 isn't nearly that-- but it IS one of the funniest bad films you'll ever see. The film's notoriety begs an interesting question: how can one make a good game based on the worst movie ever made?

Fortunately, the game itself isn't half bad, largely because designers at Gremlin deftly sidestepped this thorny question by not basing the game directly on the movie's plot. The premise, instead, is that Bela Lugosi's double has stolen the film reels from the archives. Though he remained faceless, he intends to bring glory to the cult classic using more footage of himself... and colorizing it! As the studio's Private Eye, your job is to find the 6 reels and screen the film, frame-by-frame, to ensure that the warped actor did not cut Bela from the flick (although just about any editing will make it better).

Gameplay is typical inventory-based adventure, with over 70 locations to explore. The interface resembles Legend's Companions of Xanth: you create sentences from a list of available verbs. Here, however, you can combine up to three actions at a time, so there is flexibility and lots of things to try. The game surprisingly responds intelligently to a lot of wrong actions, instead of the usual canned "you can't do that" message. Unfortunately, the puzzles are average at best and downright illogical at worst, and many times their solutions depend on exploiting the given verbs well beyond their common usage (you must OPEN some things that can't usually be opened, for instance). The most frustrating part of the game is perhaps right near the end, after you have found all 6 reels and are now screening the film. Here, you have to examine each scene in excruciating detail, with slow motion, freeze frame, fast forward and rewind-- many, many times over until the film's original awfulness is restored.

Overall, Plan 9 the game is a mixed bag. Its quirky parser and some obscure puzzles will upset some gamers. Still, a level of dry humor throughout the game (mostly poking fun of the film's notoriety) helps keep it interesting, and the various characters are generally colorful and fun to talk to. Worth a try if you've seen the movie, or even if you haven't-- just try it with a grain of salt, and don't expect to be impressed. 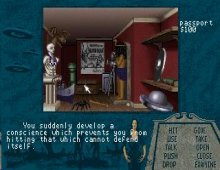 People who downloaded this game have also downloaded:
Maniac Mansion Deluxe, Pirate Fry 2: The Hand of Anturus, Return to Zork, Lost Files of Sherlock Holmes 1 (a.k.a. Case of the Serrated, Realms of The Haunting