Being able to choose between playing out the original story as it was written, or an alternative plot is a nice touch for anyone who's well acquainted with Philip Marlowe's motion picture exploits. A fairly extensive cast of starlets, thugs, and cops can give you clues about the disappearance of Orrin, the man you are hired to find.

A nicely arranged interface lets you check news on the radio, hear any phone messages, and examine your logbook to brush up on all the people and places you've encountered. It's no problem tracking all the information you obtain, because a diary is included which thumbprints all your conversations. Your office holds everything from your gun to any evidence you can nab from crime scenes. And there are quite a few crime scenes.

With all that Private Eye has going for it, unfortunately the designers omitted a small, yet crucial feature: the mystery. Ironically, you'll spend much of the game searching for something, heck, anything needing solving. The facts pertinent to the case are laid out for you far too often. So when you start feeling smug about having learned something important to the case, be warned: somewhere in the conversations to follow, that neat tidbit of deduction will be spelled out plainly like a size 89 Helvetica font.

This unfortunate bent towards giving away critical clues doesn't just happen occasionally during play. It happens for the game's entire duration, with depressing consistency. It's tantamount to playing the board game Clue with all the hidden cards taped face up to the frames of your bifocals. Suspense? Only if you're farsighted.

Private Eye is the classic case of a good attempt, using all the elements of a great game; but it stumbles in the area of substance, something which should be the very cornerstone of such a product."

Despite very thin gamepla and almost absolute lack of challenge, Private Eye is one hell of a slick, well-made animated movie. Alternate paths throughout the game, multiple endings, and great voice acting make this a good addition for every noir fan's collection. As long as you keep in mind that it is more a stylish, faithful multimedia reproduction of Chandler's classic rather than a game, you'll have a great time. 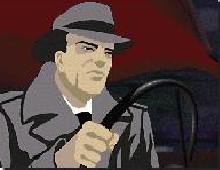