One of the best freeware adventure games I have come across, Pleurghburg: Dark Ages is an outstanding detective point-and-click adventure game that boasts an interesting plot, fun and logical puzzles, and very high gaming value.

The plot is a bit cliché, but not bad as far as detective stories go. Here's the synopsis from the official site: "...the game is set in the city of Pleurghburg and takes place a few years after the first game in the series, Cops & Killers. You play as detective Jake McUrk working for the Police Detective Agency.... one morning Jake is put on a case that sounded like just another false alarm. But he is suddenly thrown into a nightmare consisting of brutal murders and danger lurking around every corner and no longer being sure of who he can trust." Beginning with a simple investigation of a weird noise from the morgue, you will soon discover an evil (of course) plot that threatens the whole city.

Gameplay is standard point-and-click, with you controlling McUrk from a third-person perspective like Sierra/LucasArts games of yore. There are numerous puzzles, all of which are logical to solve - some even require ingenious combinations of inventory items. Police Quest fans will enjoy the semi-realistic representation of police work: you will take photos of crime scenes, take blood sample, and collect evidence, and discuss findings from autopsies with the doctor. There's also an in-game computer you can use to search for information on suspects, send and receive e-mails. The game even includes a fun shootout sequence (which you can bypass in v1.1, the version for download here) to add some variety to the game.

The game uses an episodic setting like Gabriel Knight and Cruise for the Corpse: it's broken down into days, each of which has morning, afternoon, and evening sections. You will proceed to the next time block once you finish all the required actions. The graphics, which is above-average except for quite ugly character graphics and gory close-ups of murder victims, nicely changes to reflect the current time. This includes details like the color of the sky you see from windows - a good sign of how much attention to detail went into this game.

On the downside, the writing is only average, with some minor typos, but is passable. There is also some pixel-hunting in the game -- that garbage heap that has one useful item so hard to see, and the 1x1 pixel elevator buttons that you must press at the exact spot are annoying, although not overly frustrating. And did I mention ugly character graphics?

Unlike most amateur adventure games, Pleurghburg is a satisfyingly long game that you won't finish in one sitting. It took me about 18-20 hours to beat it, and that does not include trying alternate paths - the game includes a fairly large section that has two optional paths that will converge before Day 4. Since each path tells you a different facet of the storyline, it's worthwhile to restore after you finish and play the other path to see the whole picture. Moreover, the final ending sequence that takes place in the evil cult's headquarters has many possible solutions that lead to 3-4 different possible endings, so you may want to replay the game just to see what you missed.

If you enjoy traditional point-and-click adventure games, Pleurghburg is well worth your time. The graphics and writing may be amateurish, but the excellent play value and logic puzzles will keep you entertained for much longer than an average freeware title. A great game, and the well-deserved winner of the "Best Game" category of 2001 AGS Award. 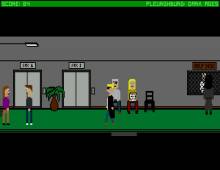 People who downloaded this game have also downloaded:
Out of Order, Realms of The Haunting, Peasant's Quest, Shannara, Pirate Fry 2: The Hand of Anturus