A short-lived European adventure game that was never released in the U.S. by one of Italy's best game developers, Nippon Safes, Inc. features a novel plot: three hapless criminals formed a team to undertake ambitious safe-cracking schemes. You control all 3 characters, although only one at a time. The interface recalls Activision's later Return To Zork, with pop-up icons that change depending on items and situation. Overall, it's a fun above-average game with logical puzzles. Dynabyte would later release Big Red Adventure, a bigger and better adventure game. 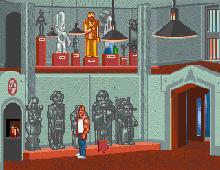