Not to be confused with an isometric game of the same name for the Spectrum ZX computer, Nightshade is a highly underrated NES game from Beam Software/Konami (published under its Ultra Games label). The reason Nightshade wasn't a commercial success is probably at least partly due to the fact that it's not a typical console fare - the game is a graphic adventure a la classic Sierra/LucasArts games, with some action elements thrown in. This means action gamers who expect another fast and furious platformer will be disappointed, and graphical adventure fans would pass this one by, mistaking it for another console-style action game.

The game's setting and storyline are remarkably similar to Batman's Gotham city. You are Nightshade, a mysterious superhero wannabe clad in a raincoat and fedora, on a quest to bring the evil Sutekh to justice for killing Vortex, the town's resident superhero. Sutekh is planning to obtain the 4 artifacts of power which would give him the power to (of course) control the world, and is accumulating a huge gang of super-villains for this purpose. The game begins after you get captured by Sutekh, tied to a chair with a bomb underneath. After you manage to escape, the real game begins.

Similar to classic LucasArts adventures, you will spend most of your time in Nightshade exploring the city, talking to NPCs, and solving puzzles. The interface is much better than the point-and-click interface of Maniac Mansion - because while it's very easy to point-and-click with your mouse on PC, on the console gamepad it's troublesome. Nightshade solves the problem quite elegantly by using a menu-based system. Pressing the SELECT button brings up the action menu, from which you can select verbs like use, examine, take, talk, etc. When you come across an enemy, the game shifts to a 2D fighting mode, where you can jump, punch, and kick your way through.

The game has many nice and unique gameplay elements. For starter, you don't start out being a famous superhero - you have to work your way towards that, by gaining popularity. The more heroic deeds you perform, the more will your Popularity Meter rise, and the more superhero abilities will you gain. Likewise, your popularity will drop if you fail in these tasks. Popularity is integral to the story, because some people won't talk to you until you are popular enough. You start by performing such mundane tasks as rescuing lost kittens, but you will soon get to rescuing maidens from burning buildings (in an obvious spoof of King Kong), and more heroic deeds. Once you get popular enough, you can take on Sutekh's Super Villain henchmen. Each time you defeat one of these, you will collect a Scarab Key. Once all the Scarab Keys have been obtained, you will be able to infiltrate Sutekh's underground lair for the final showdown.

In addition to adventure and 2D action modes, Nightshade is also notable for another unique feature: the "escape from death" mode. Whenever you run out of health, you will get captured by Sutekh. He will then put you in various imaginative machines of death; for example, tied to a conveyor belt that's moving towards a masher. You have to think and act fast to escape from these situations. Each time you get captured, you will face a new challenge. If you get captured for the fourth time, you will be killed without reprieve. Because you can't save in this game (although you can "cheat" by using the emulator's excellent "save state" feature), it means you have three chances to beat the game. These deathtrap situations are always interesting and challenging, requiring both reflexes and quick wit.

The game is memorable not only for its unique gameplay, but also a lot of wacky over-the-top NPCs and fun dialogue between Nightshade and various villains that are reminiscent of Dick Tracy and other campy crime comics. It's much better written than an average awful Japanese-to-English games, too. Overall, if you ever wonder if there's any good adventure game on the NES besides Déjŕ vu and Shadowgate, Nightshade is a good answer. It's not as good as the best adventure classics on the PC, but it's a lot of fun while it lasts - and the ability to save the game state on all NES emulators for PC makes for a much less frustrating experience. 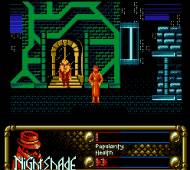 People who downloaded this game have also downloaded:
Maniac Mansion Deluxe, No-Action Jackson, Other Worlds, Lost Files of Sherlock Holmes 1 (a.k.a. Case of the Serrated, Shannara