NET:Zone is a below-average Myst-style adventure game that plays much worse than the cool premise would have you believe. Although I normally dislike their reviews, GameSpot is so spot-on (pardon the pun) with this disappointing Myst-clone that I would like to quote the review verbatim:

"NET:Zone brings absolutely nothing new to the table. At best, it's a souped-up Myst clone, but I'll give Compro Games the benefit of the doubt by admitting that a lot of adventure games could be classified as "A Souped-Up Myst Clone?." NET:Zone is set in the world of virtual reality, and as you might expect, it takes place in a 3-D rendered world. The game uses a first-person perspective, which allows you to pick up and manipulate objects by pointing and clicking on them. Movement is achieved by clicking on unobstructed spaces, which enables you to "step" ahead in long strides. This is a bear since you have to find the right place to click to move to a different area. Sometimes you click on one place in a screen and you are taken a little farther than you would have liked to go, or not far enough - and suddenly moving around turns into a complex science.

The game's main problem is not that it employs a tired and overused interface, but that its Net-based, geeky VR content is way too technical, cliched, and generally uninteresting. In this gaudy 3-D world, many of the puzzles set before you are solved using whiz-bang gadgets such as "Diagnostic Module Enhancers", "cygotes", and "radix capsules". It's a hassle to remember what these things are, never mind trying to figure out what in the world to do with them. It almost seems like the game is custom-made for Bill Gates. Puzzles consist of things such as running a diagnostic test on a Zeppelin to the cliched Internet problem of eliminating viruses. After forcing myself to play this game for many long hours (which seemed like weeks), all of the terms attached to items in my inventory and to important things in the game simply gave me a headache.

Aside from the well-composed, moody CD soundtrack, NET:Zone fails horribly in every area. Sadly, figuring out the number of different possible number combinations in an IP address can be a more entertaining 'Net activity' than playing NET:Zone ." Despite the cool setting and neat graphics, the banal plot, obscure puzzles, and repetitive gameplay sank the game below the surface. Play Beneath a Steel Sky instead and leave this game alone. 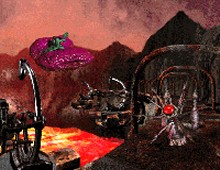