Murder on The Atlantic

Murder on the Atlantic is a fun murder mystery with a cliche murder-on-the-ship plot that develops into a solid game of logical deduction and timing. Clues and evidence must be pieced together to determine the culprit. Unfortunately, the heavy reliance on precise timing and included documentation (included in game file), almost non-existent plot development, mundane NPCs, and poor movement scheme detract from the fun, but it's a good exercise in logic for all wannabe sleuths if you can put up with the quirks.

Little adventure game on 'the Atlantic'. Walk with your 'square' though the ship and discover things. Find out who is the murderer on the ship, before it sinks. The game is very focussed on time, so you have to be at places at the right time. 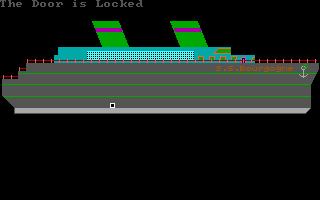 Murder on The Atlantic screenshots

People who downloaded this game have also downloaded:
Murder Cruise, Murder on The Zinderneuf, Murder in Venice, Murder by The Dozen, Perry Mason